After exceptional rain, the Caruso Family of (at least for now) Highland Park declares a Family Holiday to go mushroom hunting. Yesterday was such a holiday where we brought in nearly 5 pounds of fresh edible mushrooms, with another 2 pounds collected today. Here are some pictures: 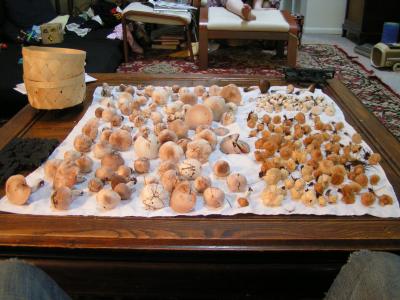 Agaricus campestris on the left, Marasmius oreades in the front right, and in the back right various Puffballs.

This Holiday stemmed from wife Nayla and I regularly engaging in amateur mycology and our love for filling baskets full of edible shrooms for lunch and dinner. Our first hunt for a mushroom’s identity was when we were dropping my younger sister Liz off back at my father’s house and we came across this gigantic mushroom growing up right out of where a former maple tree once stood. We grabbed it, took it home, and were curious as to what it could possibly be. It was nearly 9 inches tall, a full 8 inches in diameter with big shaggy spots on the cap with white gills and the remnants of a ring.

After poring over the internet and books from the library, we were able to narrow it down to one of three varieties:

Candidate #1 was the Parasol Mushroom. A choice edible with a delicious flavor. We were very hopeful.

Candidate #3 was the False Parasol mushroom, Chlorophyllum molybdites. It looks identical to either the Parasol Mushroom or the Shaggy Parasol, but it is responsible for the most mushroom poisonings annually in North America.

Luckily, there was one surefire way to tell whether our specimen was a False Parasol for sure: False Parasols have green spore prints where both Parasols and Shaggy Parasols’ are white. We immediately set things up for a spore print and left it overnight just to be sure.

Our hearts sank when the print came back green. Nothing to eat here.
But no matter. We saved ourselves hours of gastro-intestinal distress and taught ourselves a very valuable lesson: If you hunt any mushrooms at all, always always always do your research. That was a close call, and if we didn’t take the time we did, we would have run into trouble.

Too many people in the US have come across False Parasols and didn’t take the time to check the spore print before gobbling them down. The result? A 6-hour stretch of violently ill bowels and vomiting. Beautiful. And what if they had picked up one of the more serious mushrooms like a deady Amanita? A frightful thing to think about.

However, here are some interesting statistics. Michael W Beug (the Chair of the North American Mycological Association‘s Toxicology Committee) did a survey of nearly 2000 cases of reported mushroom poisonings between 1984 and 2003. He commented that he was surprised at how unusual it was for a human to die from ingesting poisonous mushrooms:

The most striking aspect of all of the reports was how rarely a human died from a mushroom ingestion. Even people who ate one of the deadly Amanita species usually survived (though often with significant liver damage). In fact, the two cases of human deaths in Canada or the United States in the past three years where mushrooms were eaten shortly before death of the individual were not attributed to consumption of mushrooms, but were clearly due to other causes.

Compared to going out and randomly eating plants in the woods and in flower beds, eating wild mushrooms is quite safe. Only about 10% of all mushrooms are poisonous, and only about 10% of the poisonous species are potentially deadly. Plant toxins are far more common, more often deadly, and generally much faster in their action. The difference is that people usually do not go around randomly sampling plants growing in flower gardens or in the wild, while they do eat mushrooms that they have not identified and may not even have a clue as to how to properly identify. They also eat mushrooms that are spoiled, where plants in a similar state of decay would have been discarded.

In some of the other reports, they discuss how the people who were killed simply did not do their homework before making a meal out of unidentified fungus.

So think about it this way. When in doubt: Throw it out! Would you be willing to take a bite of something, chew and swallow when you weren’t sure of what it is? Unless you’re 100% certain about a mushroom’s identification I don’t think that it is a very good long-term investment to ingest it.