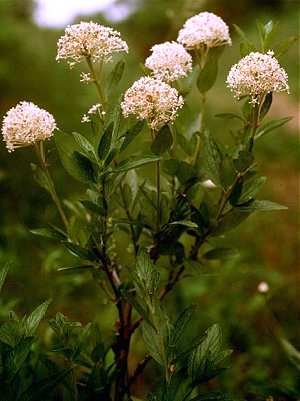 New Jersey Tea (Algonquian languages: kitû´ki ma´nitu, Lakhota: uŋpaŋ´ tawo´ťe, Omaha-Ponca: tabe-hi) is a Tisane made from the leaves and/or roots of the Ceanothus (generally the Ceanothus americanus or Ceanothus herbaceous varieties but other varieties such as C. coeruleus have been used as well). It is known as “Jersey Tea” because it was used during the Revolutionary and Civil wars as a tea substitute, as its flavor and aroma, when cured, are very similar. The two plants also look superficially similar, as both have ovate, toothed leaves, woody bases, small white flowers and three-noded seed pods.

The C. americanus bush, itself, is a small- to medium-sized shrub that grows about 1 to 4 feet tall. Rather the opposite of a Camellia infusion, Jersey Tea lacks caffeine and even acts as a very mild sedative. Extracts from the root (known as Red Root, due to its color) are known to act as an expectorant, disinfectant, and blood coagulant and were used as such by various tribes of Native Americans for stemming bleeding (especially to aid new mothers in the time immediately after childbirth), and to treat bronchial and oral ailments.

In laboratories the extract was shown to inhibit the growth of Streptococcus mutans (a significant factor in tooth decay), Actinomyces viscosus (opportunistic infectious bacteria of the mouth), Porphyromonas gingivalis and Prevotella intermedia (both of which are factors in periodontal diseases). (Li et al., 1997) Extracts from leafy shoots contain the antioxidants quercetin, kaempferol, delphinidin and cyanidin. (Prum et al., 1984)

“Tea made from a plant or shrub (Ceanothus americanus) grown in Pearsontown about 20 miles from Portland, Maine, was served to a circle of ladies and gentlemen in Newbury Port, who pronounced it nearly, if not quite, its equal in flavor to genuine Bohea tea. So important a Discovery claims, especially at this Crisis, the Attention of every Friend of America. If we have the Plant nothing is wanting but the Process of curing it, to have Tea of our own Manufacture. If a Receipt cannot be obtained, Gentlemen of Curiosity and Chymical Skill would render their Country eminent Service, if by Experiments they would investigate the best method of preparing it for use.” (Boston Gazette, November 21st, 1768)

“It is with pleasure we can inform such of the fair sex, who are attached to Bohea Tea, that a shrub, supposed by many to be the same that produces the tea we have from the East Indies, grows in this town. Large quantities have been cured, and it is scarce known by smell or taste from the real Bohea. [September 6, 1775] “(Nourse, 1889)

“The peculiar condition of the colonies rendered privations of this kind a great additional evil of that memorable struggle; almost everything in the shape of the necessaries and luxuries of life came then from the Old World. Several native plants were prepared at that time to take the place of the prohibited souchong and bohea; the ‘New Jersey tea,’ for instance, a pretty shrub, and the ‘Labrador tea,’ a low evergreen with handsome white flowers. Certainly it was only fair that the women should have their share of privations in the shape of pins and tea, when Washington and his brave army were half clad, half armed, half starved, and never paid;…” — (Cooper, 1848)

Domestic Tea.—Our esteemed friend, J. B. to whom the readers of the Courier have been often indebted for acceptable and useful communications and contributions, and especially in the department of Botany, sends us specimens of a tea of home growth, which is thus described: “Ceonothus Americanus, New Jersey tea—called by the country people Yellow Root—grows abundantly in every district of the State. Dry the leaves in the shade and use a little more than half of the green tea. I have used this tea for the last two months. It is the best substitute for black tea that I have ever met with.” The specimens thus presented and avouched were gathered by David Riker. It will be a favor to many readers if any Botanical friend can furnish a full description and materials for identifying this plant. We shall be pleased also, to receive reports of other cases of its trial and use, and of any applications of our own Flora to any household purposes, or to new uses. — (SAVANNAH [GA] REPUBLICAN, June 26, 1862, p. 1, c. 2, “Charleston Courier”)

(Editor’s note: During the Civil War [1861-1865] the price of Chinese tea had climbed to $8-$12 per pound, or roughly $200-$300 per pound in modern currency. As such there was a great deal of editorial literature published at around this time about all sorts of tea substitutes.)

During the war for independence, the leaves of New Jersey Tea (Ceanothus Americanus L.) which had at least the merit of being very common. It is quite probable that its virtues had been indicated by the natives. It does not contain theine but a very minute proportion of a bitter crystalline alkaloid, ceanothine. According to Porcher, “when properly dried, it is aromatic and not unpleasant . . certainly a good substitute for indifferent black tea.” — (Drink Plants of the North American Indians, 1896)

CEANOTHUS AMERICANUS L. Red Root, Indian Tea. Tabe-hi (Omaha-Ponca). The leaves were used by all the tribes to make a drink like tea. The taste is something like that of the Asiatic tea and is much better than that of the South American yerba mate. On the buffalo hunt when timber was scarce, the great gnarled woody roots of this shrub, often much larger than the part above ground, were used for fuel. (Gillmore, 1919)

New Jersey Tea (Ceanothus americanus L.), “kitû’ki mänitu” [spotted manitou]. The dried leaves of New Jersey Tea are used as a substitute for Ceylon black tea by the Menomini. Although my informant could not say, it is quite possible that the tribe learned this use from the civil war veterans among their number, who discovered it during the war. (Smith 1923) (ä, as in flat; ê, as in bet; â, as in raw; û, as in luck; au, as ow in how; u, a whispered terminal u; ai, as in aisle; x, a whispered aspirant; î, as in bit; ‘, glottal stop)

(Editor’s Note: “Bohea” tea in Colonial America simply meant “English Tea.” It was not until many years later that “Bohea” took on the connotation of “inferior,” in reference to tea that was picked late in the season. Some later authors appear to have confused this context. Additionally “Bohea” is the name of a cultivar of tea.)

The Distribution of Ceanothus americanus in the USA

Ceanothus americanus L. New Jersey Tea; redroot. Shrub to 1 m, often freely branches; lvs narrowly to broadlay ovate, 3-8 cm, usually more than half as wide, obtuse or acute, broadly cuneate to rounded or subcordate at base, the lateral nerves often naked or 1-3 mm at base; infls on axillary peduncles, the lower peduncles progressively longer and up to 2 dm, each panicle short-cylindric to ovoid, occasionally branched, often subtended by 1-3 reduced lvs, the individual umbels of the panicle usually separated by distinct internodes; fr depressed-obovoid, 5-6 mm; 2n=24. Upland woods, prairies, and barrens; Que. to Minn., s. to Fla. an Tex. June, July. Var americanus, occuring mostly in and e. of the mts., has the leaves sparsely pilose only along the nerves beneath. Var. pitcheri T. & G., occurring w. of the mts., has the lvs pubescent across the surface beleath. Var intermedius T. & G. occurring on the coastal plain from Va. s., differs from var. americanus in its very much branches habit, more numerous infls, and small lvs commonly 2-4 cm

C. americànus L. (American), NEW JERSEY TEA. — Low shrub up to 1 m. high; the flowering branches herbaceous, new each year, erect; leaves ovate or ovate-oblong, acuminate or acute, 3-ribbed, serrate, cordate or rounded at base, green and glabrous above, gray and more or less pilose beneath, mostly 5-10 cm. long and 2.5-6 cm. broad; penduncles axillary, naked or with few subterminal bracts, floriferous only toward summit, usually 2-10 on a branch; flowering thyrse 1.5-4 cm. in diameter, in fruit 2.5-5 cm. in diameter. — Dry open woods and gravelly of rocky banks, Fla. to Ala., n. to centr. Me., s. Que., s. Ont. and s. Man. Late May-Sept. — Leaves considered one of the best substitutes for tea during the AM. Revolution.