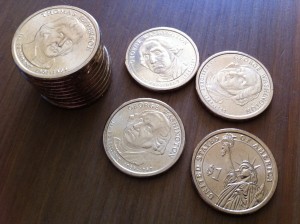 So even with the bad economy, there is one tradition that we’ve turned into a weekly affair that adds a bit of whimsy to our everyday lives, and to those we purchase everyday items from: Dollar coins.

A Little Bit of History

Lots of people remember the Susan B. Anthony dollar, a coin that everyone (apparently) disliked. It looked and felt like a quarter with its silver color and rolled edge, and as such was often confused for a quarter in circulation. Because of this, they only were minted for three years (1979-1981) but since they became so popular with vending machine manufacturers and train and light rail systems that the Treasury nearly ran out of them  in the late 1990s, which is when Congress discussed minting the Sacagawea Dollar to replace Susans in 2000.

The fact of the matter is that a full implementation of the Dollar coin would save nearly $500 million a year by a simple matter of resources necessary for circulation. Each dollar  bill costs about 9 cents to manufacture where each dollar coin takes about 20 cents. However, a dollar bill’s lifespan in circulation is about 18 months before it falls apart, where a dollar coin could last 30 years… or more.

This means that keeping a dollar bill in circulation for 30 years costs $2.70 vs the 20 cents of the dollar coin.
(That’s a savings of ~8.3 cents per year, per coin. Over millions of coins, that is significant.)

No surprise that the the Act was never passed.

It almost seems that in spite of the proposed Act that the need for more coins in the Treasury caused Congress to order another strike of Susan B. Anthony Dollars in 1999.

Then in 2000 there came the Sacagawea Dollar which completely re-worked the look and feel of the dollar into a brilliant, thick golden coin, while keeping its metallic signature identical (so that vending machines that could accept Susan B. Anthony dollars could also accept them without any need for an upgrade).

Still feeling weird about the Susan B. Anthony dollar, the Sacagawea Dollar received mixed reviews. Some people loved it. Others hated it. Polls even to today are mixed (but I have some theories about that).

Giving the dollar coin its latest try, in 2005, Congress enacted Pub.L. 109-145 to give a new face… or rather new faces to the dollar coin: All of our (dead) Presidents.

In two years from the Act, the plan was to release 4 (dead) Presidents a year (similar to the State Quarters) until all eligible Presidents were honored. So in 2007 George Washington, John Adams, Thomas Jefferson and James Madison were engraved onto the obverse, where the Statue of Liberty is on the reverse. Also at this time, the minting mark and date were no longer struck into the face of the coin, but instead were engraved along the edge.

And this year (2011) we’re expecting to see Johnson, Grant, Hayes and Garfield.

First of all, I love how my kids react to them.

What child (or bit of child in all of us?) does not like a pile of golden treasure?

This past Christmas I gave little sacks of 10 shiny $1 coins to my daughters, nephews and daughters’ best friends that were mixed with glass “gemstone” blobs and tied with a little “guardian” dragon figurine at the top.

Not only that, but they’re a great tool to teach history. Every time we get a random pile of them from the bank, I sit down with my eldest daughter and we go over each of them, sorting the Presidents out. It’s gotten to the point that she’ll be able to identify the them on sight and when she put together one of her Presidential puzzles we got her from Barnes & Noble, she’ll exclaim, “Abba! It’s John Adams! Like on my coins! Sit down, John!” (that last bit she picked up from the musical 1776 🙂 ).

It literally gives weight to their purchases, and lets them understand the value of a dollar.

As I mentioned, each dollar coin that’s in circulation saves our country on average a little more than 5 cents a year. That kind of savings adds up quickly. If steps were taken for us to adopt the dollar coin as our base currency and do away with the dollar bill (as many other countries have done with their base currency), we could save a very significant sum of money.

Third, it saves *me* money.

This is a little known fact but the government currently has in place a direct shipping program to get dollar coins in circulation.

You can order them in bulk denominations of $250 and get free shipping.

Now, if you have a credit card that has “cash back” rewards…

My debit card gives me $1 back for every $100 I spend on anything when I use the card with a credit card transaction. This means that for every $1,000 of coins I order from the Mint, that I get back $10. To put this into perspective, my savings account (which is a lot more than $1,000) gives me a measly couple bucks of interest every year, so purchasing and using $1 coins in this manner is a better investment than what I’m currently getting from my bank, and since we use the coins for our everyday purchases, we comply with the circulation program.

Of course if you want to give this a try, many credit cards with “cash back” systems do not count cash-like purchases towards your cash back totals. You’ll have to check your cardholder agreements.

For those of you who think this is “cheating the system” let’s go over the math:

In either case, this is some food for thought.