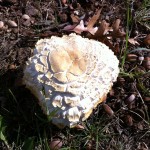 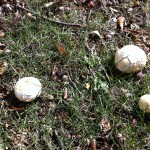 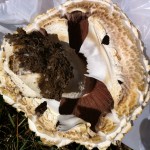 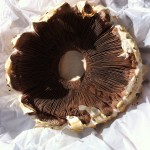 Another Horse Mushroom, popped on the same day as Specimen 2010/10/19#01 but in a different spot several miles away.

All features except the crazy scaling on the cap match. Also A. arvensis (in my experience) tends to be rather picky in the rain/temperature conditions in which it’ll grow. Since they popped at the same time as the other specimen, that’s an indicator of their similarity.

The crazy scaling is probably due to the high wind / dry area in which they were growing (think of how a loaf of bread bakes in the oven, the crust hardening and then still soft dough bursting through it to form new crust).

Also, there is some possibility that this might be one of those fuzzy-areas between A. arvensis and A. macrosporus (which grows in conjunction with pines), as these specimens were found growing near oak trees (as you can see the acorns in the images).

Perhaps this is worth a bit more study.