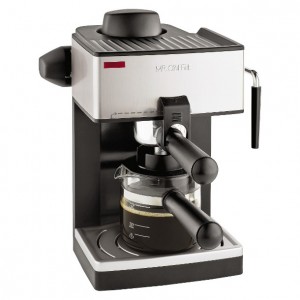 No, this isn’t an advertisement. 🙂

So not too long ago, my wife got me a $40 Mr. Coffee “Cafè Espresso” machine, and I fell headlong down the path of espresso-based drinks. As someone who enjoys his Italian heritage and believes that things that are worth doing are worth taking the time to do it just seemed natural to dive headlong into coffee culture and try my hand at being my own barista.

Besides saving a ridiculous amount of money (the machine paid for itself 3 times over in the first month) and enjoying the ultimate drink for one of my lineage who is a bit of a Steampunk (steam-powered coffee; nuff said), it really thrust me into learning the history behind the method’s invention, as well as some curious things about its use — or should I say misuse — in the subsequent 150 years.

I’d use the machine every morning, afternoon, and evening to enjoy my habit quickly — the meaning of espresso — with less caffeine, and more flavor, with cappuccino as my drink of choice, and espressino for my other half. The kids even enjoyed hot lattes (not cafelattes which we call lattes here; a latte in Europe is hot steamed, sometimes flavored milk without the coffee).

The machine was great except for two things that bugged me: 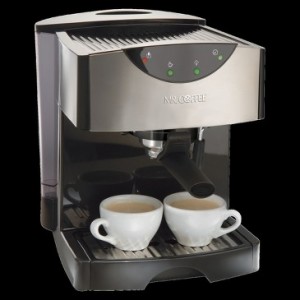 So about a week ago, my wife surprised me again and bought our machine’s “big brother” a proper 15-bar pump machine with a big water reservoir for about $80 and I immediately began brewing with the accumulated knowledge I had gathered from the previous machine.

Until I noticed that some things weren’t quite adding up. Literally.

The steam machine came with a carafe that had gradations on it labeled with a steam icon (for filling the chamber to froth milk), 2 for doppio (that is 2 ounces) and 4 for quadruplo (4 ounces). However, when I brewed coffee using roughly the same amount of grounds it didn’t quite taste right. It was a lot weaker.

It was then I realized that what the steam machine was calling doppio and quadruplo, were actually twice the size they were on the pump machine. Precisely twice.

A shot of espresso should be about one fluid ounce (30ml give or take), so a doppio should be 2 ounces. What the steam machine had labeled as a doppio was 4 ounces, and the quaduplo was 8 ounces. As a result, where I thought I was drinking cappuccino, was actually drinking double cappuccinos.

The smallest size cappuccino that Starbucks offers is 12 ounces (comperable to what I was making) where a “single” cappuccino is 6 ounces (2oz espresso, 2oz steamed milk, 2oz froth). The largest (31 oz: their “trenta” size, larger than a bottle of wine — good Lord…) if filled would represent over 5 cappuccinos. 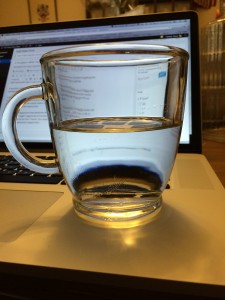 To visualize, I poured 6 ounces into one of my standard sized mugs. For a cappuccino the bottom third should be espresso, the middle third milk, the top third foam.
In other words: Only half of the mug.

I have no clue as to why the two machines, made by the same manufacturer, differed in this regards. It really makes no sense.

However, it did remind me of a systemic problem that our country faces: Portion sizes. From efforts to prevent restaurant-sized portions in schools (and kids being sore about it) to massive hot and soft drinks, this trend has also translated to a number of coffee houses which have inflated their portions to keep up.

This is despite the fact that a good Italian coffee is a small indulgence which is meant to be enjoyed over a long period of time (regardless of espresso‘s quick origins).

Here’s to a bit of perspective — and properly-sized drinks from here on in. 🙂

PS: I may need to get some smaller mugs. 🙂