Ah, Young Earth Creationism. The belief that the world is no more than 6,000 years old and that it was created in a literal 7-day week of 24 hour days. It is the ultimate anti-scientific hypothesis, and adherents to this ideology loathe the theory of evolution, the big bang, and other mainstays of our conventional understanding of the universe.

As a Christian, myself, I find this idea frightening, but not in the way you would immediately think. Where I do have a serious ideological problem with it (I often take solace in the fact that such figures as Mendel and Lemaître were devout Christians) my fear comes from a distinctly theological cause…

The Barna Group did a survey where they found — among other things — that current young adults had the following perceptions of Christianity:

These numbers are disappointing, especially since according to Pew Forum surveys, the vast majority of Christians — like I do — embrace science. Most Christians see the beginning of Genesis as allegorical. A story about why and not how. Not a textbook for the origins of the universe.

So where does this perception come from? Predominantly Fundamentalist Evangelical churches. A relatively small, minority group that make a lot of noise and (speaking of textbooks) have a number of politicians in the wrong places.

These are the culprits who are causing our youth to flee from the church, and in many cases from their faith due to their belligerence in spreading their ideology — insisting that your salvation is in peril if you do not believe that the world was created in a literal 6 days.

Now, this is where my fear, and the title of this post comes in: Christ had a lot of things to say. We can probably agree that many things that are attributed to him could be ambiguous or potentially had hidden meaning, where one needed to think, meditate, and pray hard in order to fully understand. He did teach in parables after all.

However, out of all of his teachings there was one that — although it is certainly figurative — it is hardly ambiguous or unclear at all:

But whoever causes one of these little ones who believe in Me to stumble, it would be better for him to have a heavy millstone hung around his neck, and to be drowned in the depth of the sea. – Matthew 18:6

I contend that these individuals who are anti-science are the ones who are in peril with how hard they push our nation’s youth away — but unlike them, I can point to a definitive place in the Bible where it says so. 🙂 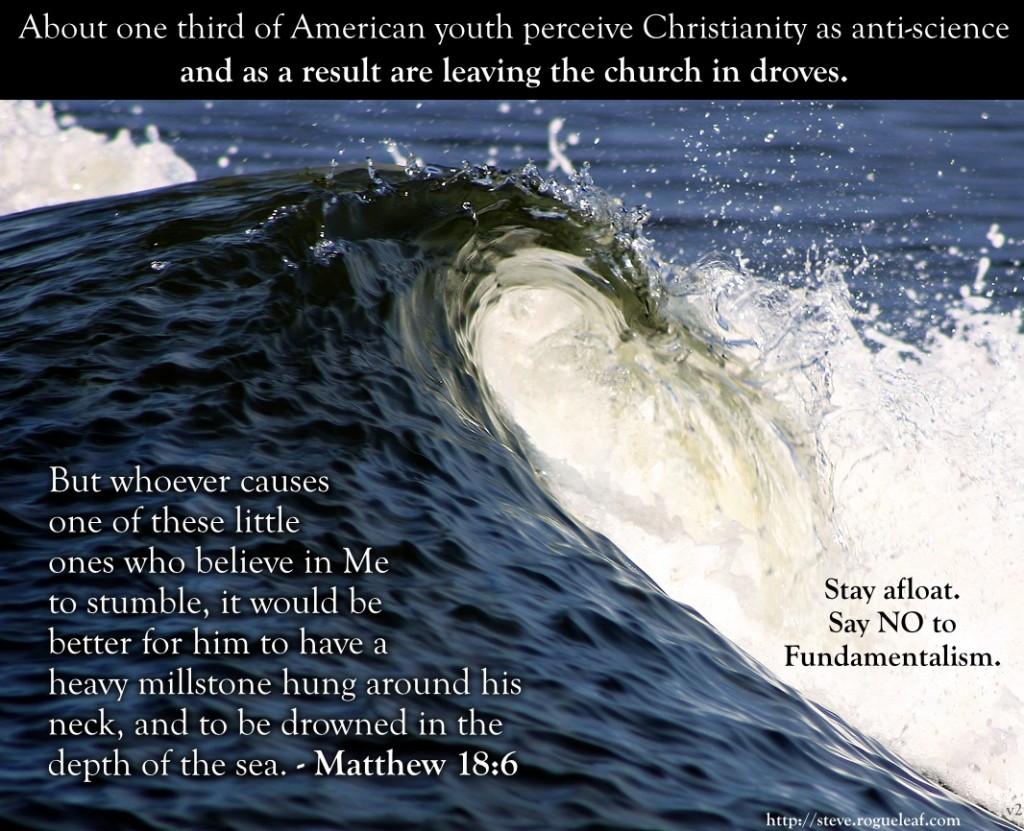 PPS: You probably thought I was going to make a crack about Noah’s ark, did you? 🙂